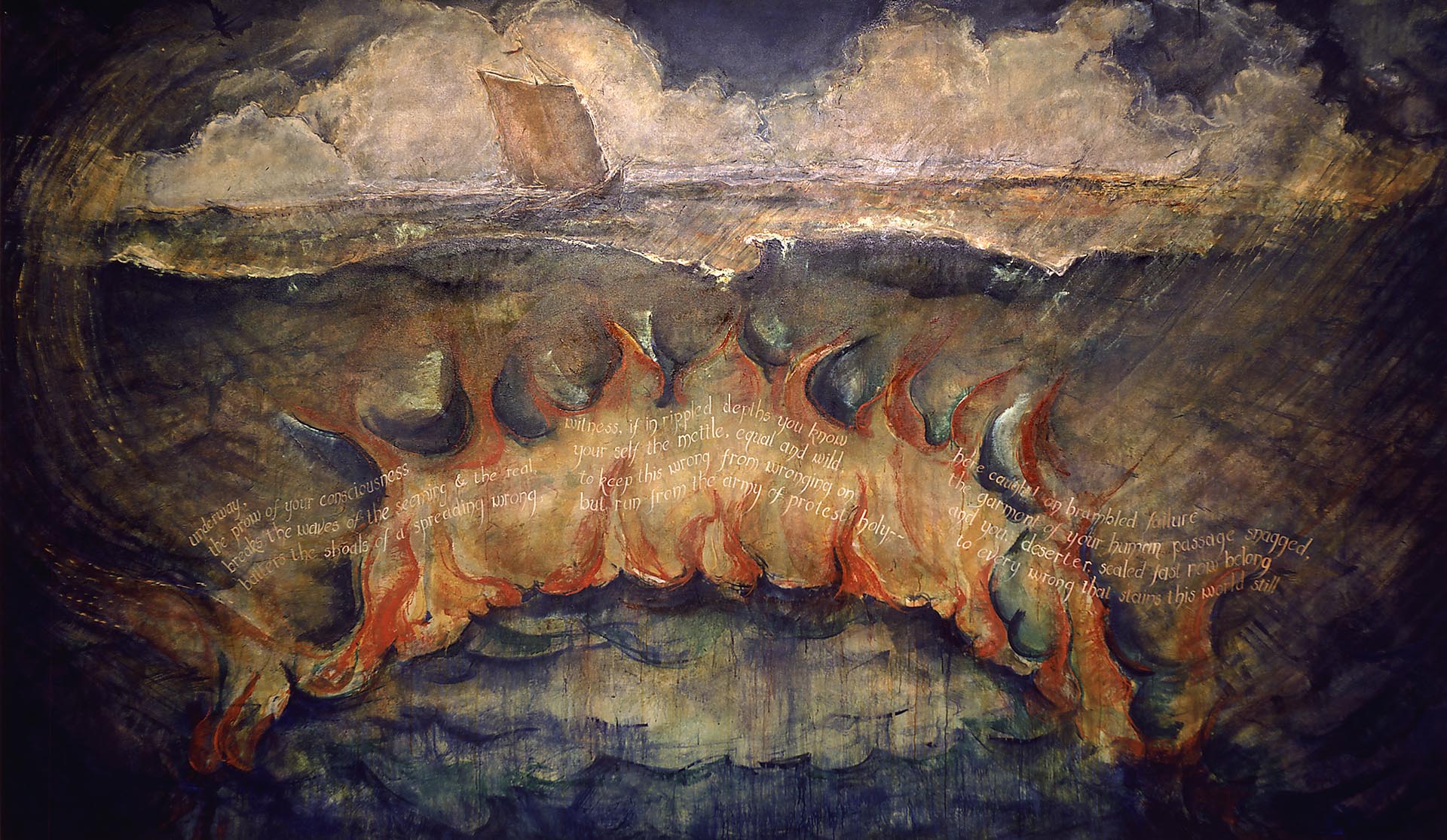 that we were called into this world as human

7′ x 11′
oil glaze on gessoed canvas; in the manner of William Blake and William Turner
by Joseph Luis Ramirez

The mural was originally installed on the south wall of Suite C, 621 Madison Street, Evanston, IL, on May 25, 2000

Current disposition:   The mural was carefully removed from Dr. Margolis’ office when he closed his practice, and was stored at that time in keeping with standard curatorial methods overseen by the artist.   Eliezer has a strong interest in securing  a new venue for the mural, either through commercial sale or through loan to a nonprofit with an organizational mission aligned with the mural’s theme.  Individuals, institutions and organizations with an interest in obtaining the mural for purchase or loan are encouraged to contact Dr. Margolis.

underway,
the prow of your consciousness
breaks the waves of the seeming and the real,
batters the shoals of a spreading wrong;

witness, if in rippled depths you know
your self the mettle, equal and wild,
to keep this wrong from wronging on
but run from the army of protest holy–

here caught! on brambled failure
the garment of your human passage snagged,
and you, deserter, sealed fast now belong
to every wrong that stains this world still

Free-worked or remade verse translation by Eliezer Margolis of a fragment of a commentary from the Babylonian Talmud (Tractate “Shabbos”. Ch. 5, p.54/B-3)

Joe Ramirez (1958-, San Francisco) has been based in Berlin since 2007at his Blood Orange East studio, a repurposed girl’s gymnasium. A native Californian of Hispanic/Irish descent, Joe studied furniture design in England, theology in France, painting, film and restoration at the School of the Art Institute of Chicago, and sculpture at the Royal College of Art in London, England. Ramirez describes his painting style as “visionary,” giving expression to a confluence of many sources of inspiration including the imagery of early cinema, California landscape, and revered artists such as Joseph Mallard William Turner and Velazquez.

Ramirez’ most recent project, The Gold Projections 1,2,3 which premiered in Berlin in 2017, set the art world abuzz. In Berlin, while working on the twelve-year long and uniquely skilled labor involved in producing The Gold Projections, Ramirez became the protégé of a greatly admiring Wim Wenders, the internationally renowned auteur/film director. In conjunction with the premiere of The Gold Projections, he also produced and directed two films Somnium (2017) and Vermillion (2019) both of which were based on his patented technique of projecting film images onto specially gilded convex discs 4,5. Somnium debuted at the 67th Berlinale film festival and The Gold Projections was released that same year as an art book published by Kehrer Verlag 6, 7.

While working on the mural that we were called into this world as human, Ramirez was the principal artist of Axis Mundi Studios, which he founded while in Chicago. Over a span of fifteen years, Axis Mundi Studios was involved in creating and renovating sacred spaces, and in the process Joe Ramirez developed a reputation as one of the most highly regarded liturgical artists in the country. The impetus to conceive and found Axis Mundi Studios arose from a commission by the Benedictine sisters at St. Scholastica Priory in Chicago, to initially restore priceless Beuronese frescoes in their chapel. That restoration work extended into a seven-year project that entailed the renovation of the entire worship space. Included were original designs for a new altar, ambo, choir chairs, tabernacle, floor and lighting.

In addition to being an artist, furniture builder and art restorer, Ramirez is a published poet and a film director. His 1992 hour-long dream narrative Descent, and Viridian, a 1994 feature-length narrative, both opened to packed houses and critical acclaim at The Film Center in Chicago. Descent was based on Joe Ramirez’ in-depth studies of the English mystical poet and painter, William Blake, one of the identified influences in his approach to the text-and-image style employed in that we were called into this world as human.

3. “A Marriage of Art and Film at Berlin Festival”  The New York Times